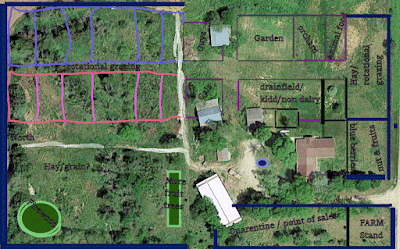 One problem I've had with setting up our new(ish) homestead is that it took awhile to get a handle on what layouts & functions made the most sense. On one hand I sometimes feel frustrated that we don't have more done.  Overall though, spending our time and energy dismantling and disposing of what we didn't want instead of forging ahead with the new seems to have worked out.  One of the benefits is that over time, the form and function of the house and six acres began to take shape.

The lines above represent fences of one kind or another, and their color represents whether they are built yet,  slated for far into the future, or somewhere in between. Black lines show completed fencing.  Those lines in purple are in progress, i.e. have some of the fencing installed, and/or some of the posts.  The light blue and light pink lines are browsing areas for the guys and gal goats respectively.  Not sure at this point what combination of panels, woven and electric will be used for those rotational grazing areas.  This project is slated to begin when the barnyards are finished.  The thicker, royal blue lines are the furthest out on the time line, and will be perimeter fencing, and fencing for the one area that may have limited public access.

When the plan took shape some of us were dismayed to see how much fencing was involved.  It hurts, both the back and pocket book, and even my pride.  I've caught myself wincing at the thought that all these fences to no where leaves me looking like that crazy city gal who doesn't know a tree stump from a water pump!.  All I can say in my defense is expert after expert stresses rotational grazing is best by far for animal health, and even pasture management.  Not to mention we are on a highway, are far too lazy old to chase animals, and past experience has left me with (literal) scars.  I barely clear the five foot mark, and trying to separate two large fighting chows in an open space impressed upon me the importance of being able to corral and control animals.

Right now we only have a few of the zones up and running.  The dog zone in the front and side of the house, the chicken and goat zones to the east of the house, in front of the temporary goat barn.  I had wanted the chickens down in the garden, so they could help with weeding and bugs, but I was over ruled.  Their chicken tractor is a wee bit NE of the house, and there's been no problem at all with smell or insects.  The current focus is on the fencing projects, and in keeping those 2 lanes that run east to west between and behind the barns cleared out enough to work on the out buildings there.

One project that didn't make the master picture is the greenhouse, which is planned to sit on the south west side of the guys goat barn.    Since I made this diagram back in March/April, we've finished half of the garden -orchard- animal food block fencing, and have planted the green square behind the machine shed with apple, apricot, and fig trees, rhubarb, horse radish, and black berry bushes.  So many teeny tiny steps, but at the end of the day, we made movement towards the goals. 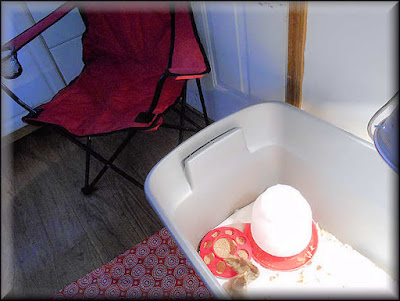 Glad to share that the laundry- cheese making- seed starting- chick brooding room has officially moved into the hot chicks phase.  Once again I wanted a few Orpington to take over the work of raising the littles, and once again it looks like I waited too late.  Or not.  Think I may try hatching my own Orps if I can't find any at the local stores.  For some reason, I don't like the idea of having chicks mailed to me.  Irrational, I know.
Read more »
Posted by jewlz at 7:53 PM 3 comments: