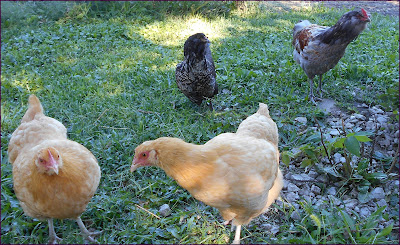 Well hello again.  April 1st has rolled around once more, bringing with it the need for an end of year update.  Looks like I have a lot of catching up to do first, though.  It's been quite a while since I've posted.  When last I did, these juvenile chickens were still living in the cheese making-seed starting-laundry-chicken growing room, and I was still tickled pink to have finally brought some 'real' buff orpingtons into the mix.  We had also started some raised beds in the garden area for our first annual vegetable plantings.  Gardening is of course one of the major lynch pins of the homesteading type life style, but if we had to survive on what we grew last season we'd have had only a month or so of meals before sub coming.  Plenty of those peas grew, and I was excited to be able to save some of those plants seeds for this year.  We also enjoyed plenty of green peppers and paste tomatoes, but no where near enough to can.  The potatoes were stunted, too.  I tried planting them in straw, and though that is successful for many, it was not for us.  Carrots and turnips were a no show.  The chickens ate much of the corn seed before it grew, and though the  pumpkins were going gang busters, they ended up drowning in a sea of weeds.  Fortunately, or unfortunately, depending upon one's view, the garden's sub-sub-sub par performance was 100% operator error.
It is far less clear where to lay blame for the chicken's bumpy road, though.  In fact, not knowing what was going on or what the ultimate resolution would be is why I quit posting- it was the next subject I planned to address, and to this day, I still don't know the who what where whens or whys of the situation.  But those details can wait till the next post.