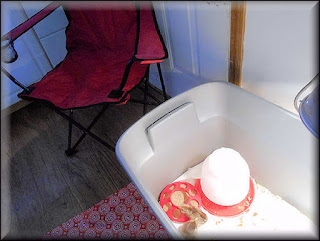 As I've mentioned before, the master plan has always included Buff Orpingtons.  It slowly dawned upon me that first year that I did not, in fact, have those mixed use mothers.  The second year of chickens- 2016- this was remedied.

We added two buffs and two Easter eggers to the mix, and were looking forward to lovely colored eggs and home hatched chickens.

As anyone who's lived with little chickens knows, however, the bloom quickly fades off of that rose.  The day comes all too soon when you simply can't abide another moment of the messy, annoying youngsters brooding indoors with you.  At this point out. they. go. Ready. or. Not!  Our chicks, or rather, we, reached this milestone on July fourth 2016, despite not really having an exit plan fleshed out.   I wasn't confident throwing them all together in the chicken coop immediately was wise, so I took a probably dumber approach, and housed the younger group in the run section of the the coop.  We then had a total of nine hens and two roosters, which instead of adding to our big rooster's harem as we'd planned, divided it into an even smaller group.

Still, things seemed to work out, for the most part.  Eventually, we put the youngers in the actual coop, and that too seemed OK at first.  The first signs that it wasn't ok was when a couple of the ladies began roosting in the near by tree, and then the goat barn, instead of their coop. After a week or so of getting them disciplined enough to turn into the coop, they started vanishing. :(.  No signs of fowl play, as they'd say, nor of any intra rooster animosity. . . they just disappeared.  All told, three of the Rhode Island Reds, the Black Easter egger, and red rooster ended up gone.

I expected to find them at the coop door one morning, or at least find bodies, somewhere, but nary a single clue surfaced.  One gal had even been decked out in a bright yellow saddle, and scraps of that haven't turned up, either.  So. . . not the first loss, we did lose a little chicken to accident the first year. However, these losses seem some how preventable- I should of housed them more securely, had a better plan for integration been wiser and kinder and forseen the looming problem in time to avert it.

None of those things were options, though, so instead we decided to use the last bit of outdoor work time adding to and beefing up animal housing.
Posted by jewlz at 9:23 PM 2 comments: 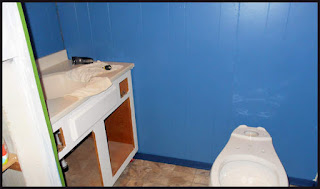 Much of the late spring/early summer of  16 was spent wrapping up bits and pieces of projects.  We did the first sprucing up of the hall bath.  Walls were patched, primed and painted.  The sink cabinet painted.  New flooring and toilet installed.  The only thing I have to say about the finish choices is 'ya win some, ya lose some.'  To the other fart's credit, I saw these same choices made in a historical home rehab a few months later.  Perhaps it will grow on me.

We also managed to get the first goat pasture-drain field fence completed.  If you look closely, you may spot two happy goats, and the wooden corner posts that delineate the fence line on the east.   The white peak in the background is the front (south side) of the barn. 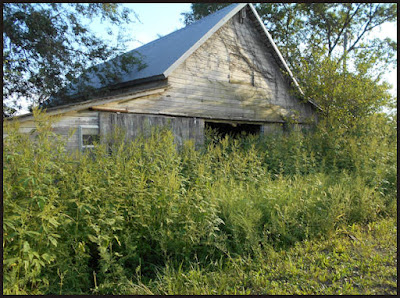 To the left is a shot of the barn, from the lane that runs on the north side of it.  This is the back of the barn.  One of our goals for 2016 was to work on taming this "block" of outbuildings.  Ironically, we decided it was too over grown to put the goats in charge of weed eating.  That task fell- and felled- us.  We'd no sooner get the weeds knocked back enough to start the fencing than they'd grow back.  I'm firmly convinced the area is one of Dante's circles! 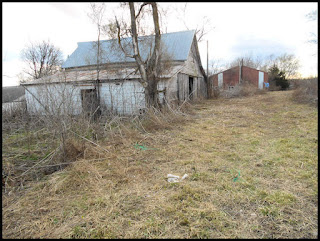 This is a shot looking to the west, at one of the times progress had been made. 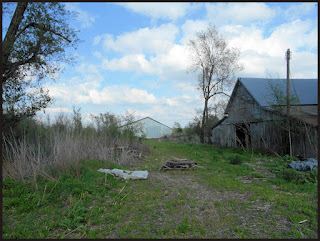 This is a shot looking to the east that also captures a time of some progress. 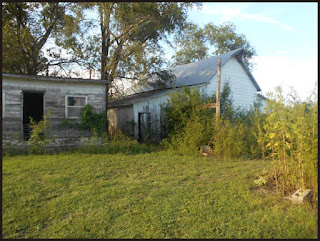 The front "lane" or south side of the buildings was also terribly over grown and neglected. 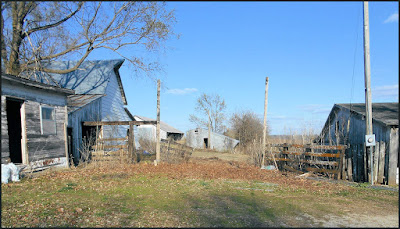 The area also received much of our blood sweat and tears throughout '16.  But again there was little to show for it in terms of permanent improvements.


We ended that quarter with a nice little va-ca, again to the family cabin up north, on the shore of lake superior.  That area did help us remember that our landscape was practically barren compared to some. 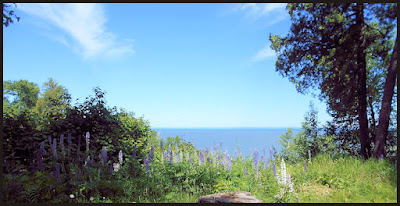